“There’s no such thing as inappropriate weather, only inappropriate clothing”. It’s a phrase often said in our house, and no better one to describe the sentiments behind our latest microadventures. In the past, particularly in the colder, less inviting months, it’s been easy to fall into the trap of planning our trips to coincide with ‘reasonable’ weather conditions. The danger with that strategy has been that when those reasonable conditions fail to present themselves in the last weekend of the month, it’s easy to bin our plans and stay inside. This year, we’ve set dates and stuck to them (so far!) regardless of what the good old British weather has thrown at us!

Sadly there is scant evidence of a January microadventure to kick off this year, save for the record on Strava, as we got so wet cycling up to Leith Hill, that by the time we’d pitched our tarps (in record time) all I wanted to do was get warm again, only venturing out of my tarp some 15 hours later! This month, however, we ultimately had our eyes on our April adventure, in which we plan to do an overnighter in the Lakes during a family holiday. We’ll be walking somewhere from Keswick to a suitable mountain-top location, so we took the opportunity to pack our likely kit for that trip into our rucksacks and head off for a short walk along the North Downs Way (NDW). A timely cold snap and a smattering of snow kept temperatures close to freezing the whole time and helped replicate the possible conditions we might face in a couple of months’ time.

I know the NDW very well between Guildford and Reigate, but not at all east of the latter so we picked up the trail near Merstham, climbing up to the ridge before following the signs towards Godstone. Sections that weren’t hard-packed farm tracks were heavy going, but we made steady progress and after about 6 miles we were in the vicinity of our intended overnight stay, having previously scoured the map for a likely spot. 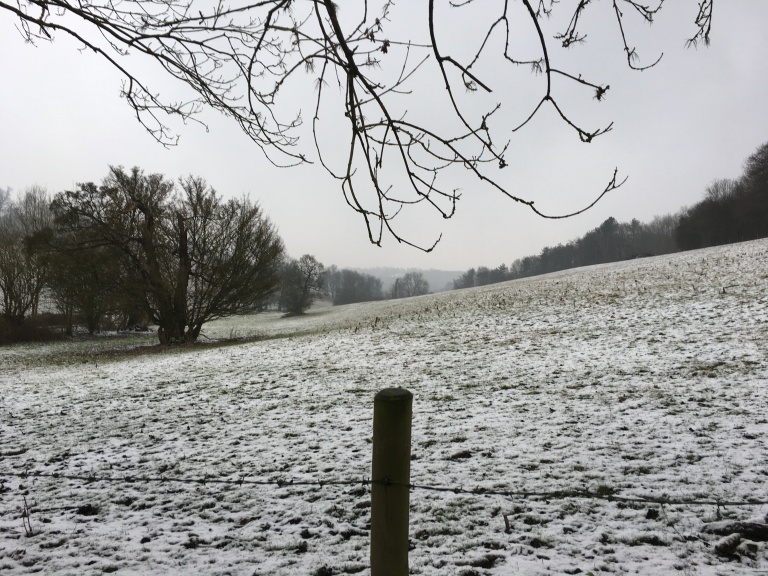 It’s got to be said, I love a traditional paper map (if I can call some of my waterproof maps, paper!) I could peruse one for hours, plotting routes, working out gradients and looking for interesting features. And used in conjunction with their online counterparts, the likes of Google Earth, Google Street View and even YouTube, you can build up an even better picture of what you might be faced with on the ground or in a particular location. A typical 1:25000 OS Map is perfect for giving you some high level ideas on where might be likely bivi spots – patches of woodland or forest, flat terrain, sheltered areas, water sources close by and so on. Once you’ve got some basic ideas, these can be qualified to a certain degree using the earth view on Google Maps. A note of caution here though is to watch for the image capture date, generally in the bottom right corner. If the terrain you are looking at is forested, with the possibility of timber work, then be prepared for the landscape to look quite different on the day you are passing through. I’ve fallen victim to that scenario before, even with a recently dated image capture, and it can throw your plans in to a bit of a spin, just before the last rays of light!

The NDW has also been captured on Street View so you can virtually cover the ground and inspect likely camping spots or access points before you arrive. And almost to prove my point above, the spot I’d identified as being the best (a seemingly pan flat, small open expanse of grass running back 100 yards off the main path to small trees) was in fact on a bit too much of a slope for comfort with trees so densely packed it would have been hard to get any reasonable shelter pitched for the conditions. So we carried on the NDW for a few hundred yards more, sliding on the off camber combinations of snow, mud and wet chalk, before pushing into more mature trees giving much more space between their trunks to pitch a tarp and a tent. Andy was trying out his new Wild Country Zephyros 2 tent for the first time, while I stuck with my tried and tested DD Hammocks tarp tent set up. Both went up in a few minutes and we set about getting comfortable and maintaining warmth with a cup of tea, just as the latest snow flurry came down. With the snow eventually turning to rain, it was a similar feel to January but with one significant difference – I wasn’t having to strip out of soaked through cycling clothing for dry clothes. I’d also brought a book this time so spent a couple of hours page turning before a chicken curry dinner.

The overnight rain, and subsequent drips off the trees, led to a restless night. I was plenty warm enough, but simply failed to settle. I always seem to find my deepest periods of sleep on overnighters are those in the last couple of hours before dawn, which generally leaves me feeling pretty groggy when it’s time to get up. With the rain gone at first light, ice and remnants of snow left quite a crust on the tarp. A ‘two birds with one stone’ mug of water boiled in a couple of minutes for tea and porridge and with that dispatched I could set about getting packed up. The previous day’s clothes were good for the couple of hours walk back so I had one untouched dry bag, but other than that, everything else got used.

With bags packed and the area checked over we climbed out of the wood and back onto the trail, retracing our steps back to Merstham. Due to the rain, much of the lying snow from the previous day had disappeared making some off-camber sections fairly slippery but we covered ground reasonably well, arriving back at the car just after 11am. From there it was an easy drive home before commencing the usual post-microadventure clean-up, sort-out and mass-drying of things in the garage.

Having contemplated a tent for a couple of months and seen Andy’s Zephyros in action, I’ve since bought a ‘grade B’ Zephyros 1, direct from Terra Nova for £60 and you’d hardly know it had been put up, so I’m really looking forward to trying that properly in the Lakes in April. The tent’s design has its critics, but I think I can overlook some of the well-documented niggles for the price I paid.

In addition to what I wore, here’s what went in my pack (Lowe Alpine Atlas 65) and other pockets:

*Didn’t use on this trip